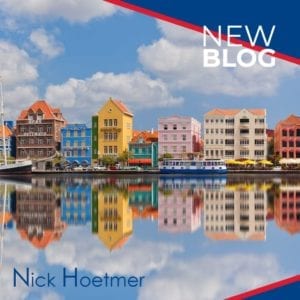 Have you ever considered living in Curaçao? Consider Willemstad Capital Curacao!

Willemstad has about 140,000 inhabitants and is the largest city in the Antilles. The city called the “Amsterdam of the Western Hemisphere” for its Dutch architecture.

The city centre of the city lies on the southeast of Curaçao, on a natural harbour; (Schottegat), Schottegat connects St. Anna’s Bay with the Caribbean Sea. There are two main sites in Willemstad: Otrobanda and Punda. Punda has coloured houses and is part of Unesco’s World Heritage. From Otrobanda (which literally means ‘the other side’) you have the best view!

The areas: Otrobanda and Punda are connected via the Queen Emma Boat Bridge, which was built in 1888. The Queen Juliana Bridge opened on Queen’s Day, April 30th 1974. The smaller Queen Emma Bridge became only available to villagers because of the larger bridge. Willemstad Capital Curacao. Want to know more about Curacao?

My name is Nick Hoetmer and I have been selling real estate for more than 7 years on Curacao. In the past few years, I sold over 100 homes. I represent sellers and buyers. Furthermore, I work with tenants, investors, and lessors. My clients are locals, Dutch, American, Canadians, Venezuelans, Germans and others. I speak Dutch, English, Spanish and a little German.

You’re interested in living in Curacao? I usually start with an intake meeting to get to know each other better. This can be in person as well as in a video call using WhatsApp or Face Time. After getting a good idea of what my buyers desire I do a market scan. After that, the first showing(s) for homes in Curacao will be scheduled.

Working in Curacao
Selling your house with Social Media

Register here! Forgot Password? Back to Login Return to Login
× How can I help you?